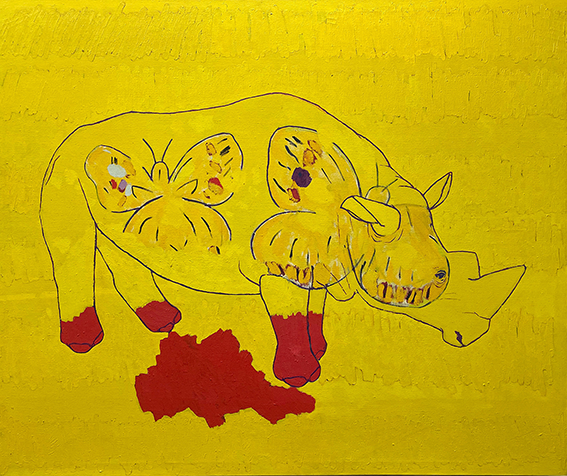 Opening
7.07.2022 / 6.00 p.m.
Centre for Creative Activity in Ustka
The opening will be followed by a panel discussion with the artists of the new exhibitions by Ryszard Grzyb and Katarzyna Kujawska-Murphy

The exhibition “Various Paintings From Various Periods” aims to present the most representative techniques and creative periods of the doyen of the so-called new figuration of the 1980s. At that period (1983-92), the artist was a member of the famous Gruppa, with Paweł Kowalewski, Jarosław Modzelewski, Włodzimierz Pawlak, Marek Sobczyk and Ryszard Woźniak, who exhibited their work and performed extensively both in Poland and abroad. Following the spirit and aesthetics of the new expression, the narratives and ideas they communicated were usually put in inverted commas, albeit with some self-ironic overtones. To some of the viewers, the world presented in Ryszard Grzyb’s works may resemble a mysterious bestiary, represented by peculiar and semi-phantasmagorical creatures whose genealogy can be traced back to Surrealism on the one hand, and to Jorge Luis Borges’s “Fantastic Zoology” on the other. Paradoxically, the artist himself identifies the genesis of his painting in his youth, when during his childhood visits to the Upper Silesian Museum in Bytom, he became fascinated by “toucans with enormous beaks and birds of paradise with their tails flowing in the colours of the rainbow.” These early fascinations made him return to those motifs more than once in his mature work, because, as he himself admits: “The motif is (…) vital, especially when it creates the dramatic tension of the painting.” Yet, it should be emphasised that Ryszard Grzyb is undoubtedly a painter of themes which he likes to combine in shocking coincidences and surprising games of associations and free imagination. The artist is also extremely focused on colour which seems to be a reflection of the lost Arcadia since, as he confesses: “Colour is a boon, a kingdom and a gift. Colour is joy, freedom and poetry.” Nevertheless, the painter strives to combine contradictions and identities, which results in extraordinary originality and perversity. This is evidenced by such perverse paintings as “Great Invisibles – Eternal Return” (2019) and “Yellow Rhinoceros in a Puddle” (1990), both featured in the exhibition.

Ryszard Grzyb was born in 1956 in Sosnowiec. He studied at the State School of Fine Arts in Wrocław in the atelier of Professor Zbigniew Karpiński (1976-1979) and at the Faculty of Painting of the Academy of Fine Arts in Warsaw (1979-1981). Between 1982 and 1992, he was a member of Gruppa, with which he exhibited his work and participated in the group’s performances. He was also a co-founder and publisher of Gruppa’s magazine “Oj dobrze już” (There, There). Since the mid-1980s, he has made several artistic journeys; in May and June 1986, together with Ryszard Woźniak, he participated in a scholarship in West Berlin, in 1990-1991 in Cologne on the invitation of Rafał Jablonka, in 1995 again in Germany on a scholarship in Lamspringe, and in 1996 in Saignon on the invitation of Kamila Regent and Pierre Jaccaud. His paintings can be found in the collections of the National Museum in Warsaw, Wrocław, Kraków, Poznań, the Zachęta Gallery, the Contemporary Museum in Wrocław. In the District Museums in Katowice, Bytom, Toruń, Bydgoszcz, Olsztyn, the Starak Family Foundation, the Jerke Museum in Germany, in private collections in Poland and abroad. Parallel to painting, he is also active in the field of poetry, having made his debut while still a student in Wrocław. He has published his texts in “Nowy Wyraz” (1980, 1981), “Miesięcznik Literacki” (1981), in the magazine “Oj dobrze już ̋, in the publication “Sztuka Najnowsza. Co słychać́”, edited by M. Sitkowska (Warsaw 1989), and Young Poets of a New Poland, (London 1993) and in the art journal Working Title, (2004) in Twórczość (2015, 2016). His “Zdania Napowietrzne” (Airy Sentences) was published by Literary World (2005). “Ja chrząszcz” (I the Beetle), a selection of poems, Tymoteusz Karpowicz Foundation for Culture and Education (2020). In 2004, he started a multimedia project called Airy Sentences, under which he collects short poetic sentences, “absurd haiku” as he puts it, and places them in a context completely alien to poetic experiments – on billboards, postcards, pencils, mugs, turning them into neon signs, information boards. By appropriating the space intended for other kinds of messages, the artist reinforces their message, thus creating a kind of suspense. He is the winner of the 2010 Jan Cybis Award.