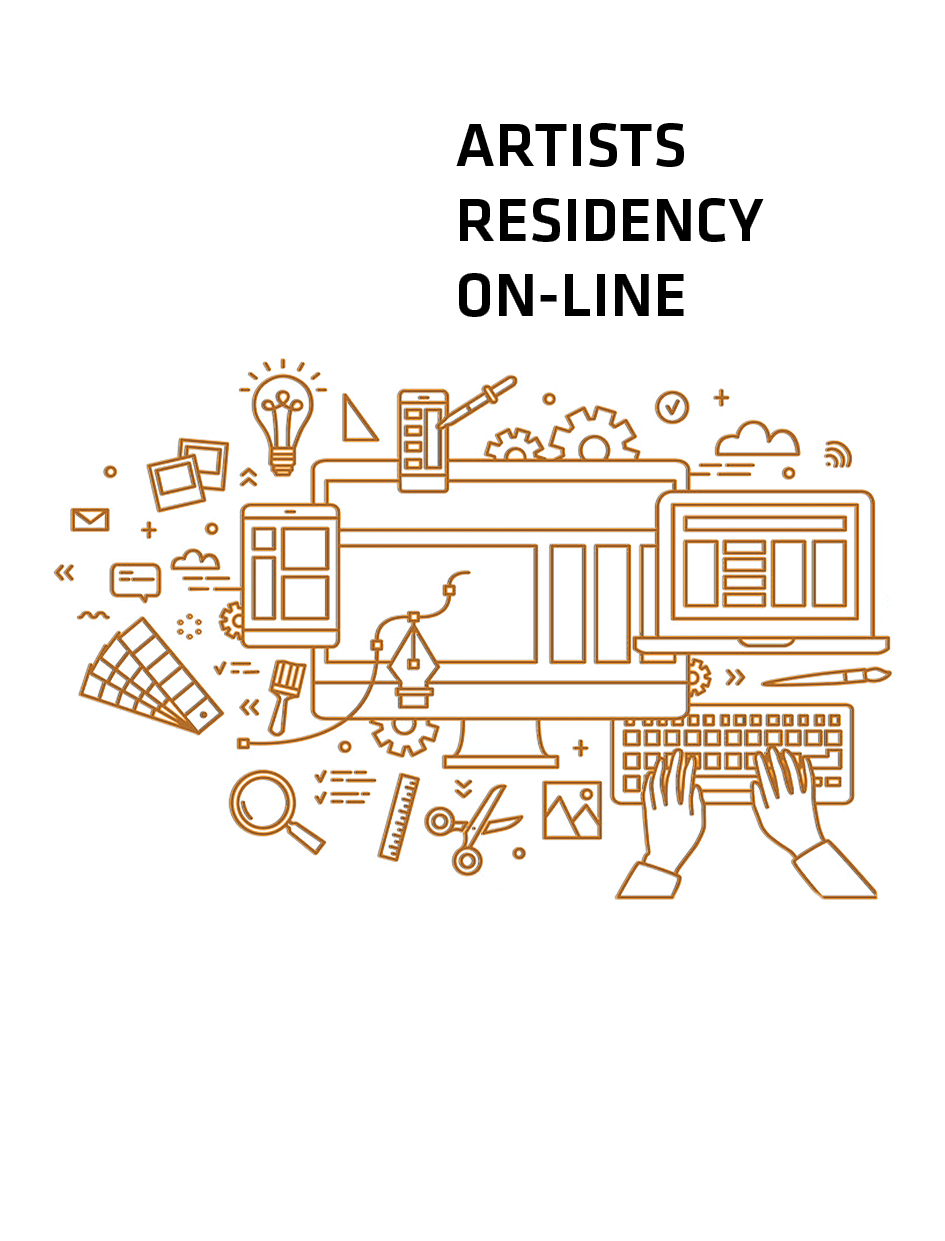 Baltic Gallery of Contemporary Art in Słupsk announces an open call for an online residency program „Miejsce – wewnątrz” / ‘Place – Inside’. It is our response to the continuation of the residency program during the Covid-19 pandemic and travel restrictions as well as an attempt to work on the project by reversing its main assumptions. We usually preferred projects referring to the history of the city and current situation in the sociological and cultural field. We expected the artists to establish a dialogue with the local community, engage them in working on the project, by organizing meetings and workshops. At this time, we encourage artists to submit proposal which will be created in the artist’s current place of residence, apartment or workspace, referring to the problem of isolation resulting from the adoption of new rules of life in the new pandemic reality.

The main character of artistic research will be the artist and its inner life, reported in a way that can be presented online. We do not expect any finished artworks, we would like to focus on the working process and documenting it as well as creating a platform for thought and experience exchange.

This program is addressed to the polish and foreign artists of various art disciplines, at every stage of career, who perceive the possibility of developing work on the submitted project using the virtual media. During eight-week online residency, we plan to work on the project, make consultations with the curator of online residency program, meetings with project participants during video conferences, presentations of work stages in the virtual space of the Baltic Gallery of Contemporary Art.

/ 11.01.2021 – presentation of the online residency program, activities of the Baltic Gallery of Contemporary Art and Center of Creative Activities, introducing participants of the program, presentation their artworks and concept of their projects,

/ 26.02.2021 – presentation of the project results in the form of an on-line conversation with artists as web conference.

Domestic abuse which has deeply planted roots in Greek society and nuclear family during my country’s economic crisis has outbursted. The Covid-19 pandemic forced extreme restrictions like lockdown to control society. From its early stage, governmental and nongovernmental organiza-tions underlined the severe domestic abuse cases. The last year, in Greece, twelve femicides occurred, which is a record number. In more than 50% of these cases, the murderer is a current or an ex intimate partner. In many domestic abuse cases, the “happy family” stereotype turns out to be the focal point of patriarchy and social oppression. Inspired by the lecture of Bonnie Honig and Martin Heidegger “Building, Dwelling, Thinking” I started perceiving home as a dilemmatic space. What really interests me is this contradictory sense of home as a physical space or state of mind which victims of domestic violence experience. In this project, I would like to reconsider Greek women’s’ “place” within the “home”.

How could I connect with women understanding home not as a “haven” but as a “prison” during a prolonged period of enforced homestay? As a female artist in Greece, how my limits are expanded while trying to address an issue that is still vastly considered taboo and even on extreme cases of violence beautified by the mass media?

Ermina Apostolaki is a spatial designer. She has studied Stage and Costume Design in Vakalo Art and Design College and Business Administration at the University of Piraeus (BA). She holds two Master’s degrees, from the Technical University of Berlin (MA), and the National Technical University of Athens (MRes). Her first solo performance “Personal Jesus” was presented in 2013 in the Gemaeldegalerie Berlin. In 2014, she was awarded a scholarship from the Zbigniew Raszewski Theatre Institute in Warsaw for the workshop “SharedSpace: Weather”, co-organised by Prague Quadrennial 2015. Her second performance “Flaw” took place in the Art Centre Bios in Athens in 2016. In 2017, her work for the theatre plays: “Don’t forget to go home” and “The motherfucker with the hat” was presented in the World Stage Design Exhibition. The same year, she was also awarded a Goethe Institute scholarship for the International Forum, held during the Theatertreffen theatre festival. In 2018, she was awarded a scholarship from Art Department Masterclass for the World Building masterclass. From 2017 to 2019, she was a scholar in the research program “Post-nostalgia: Design meets utopia”, organised and funded by Vakalo Art and Design College. As a re-sult, she realised her first sound installation “The resonance of the bazaar”, in the Art Centre Ro-mantso in Athens. The same year, she presented her coresearch on performance art and precariat audiences in PQ Talks, organised by Prague Quadrennial. In 2020 she participated with the sound game Urban Songs in the festival Dance Days Chania. 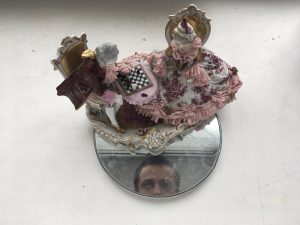 In Ukraine, telling openly about your sexual orientation is often not an act of liberation and acceptance, but it’s also many unjustified risks for being a human. Ukrainian laws contain neither norms for persecuting LGBT+ people nor efficient tools for protecting their rights and freedoms. The discrimination for free expression of identity in Ukraine goes back to the totalitarian past when the squeezing of otherness from LGBT+ people was carried out through criminal punishment and psychiatric treatment. Ukraine decriminalized homosexuality in 1991. This act wasn’t aimed at rehabilitating and commemorating the victims of repressive policies. The Constitution of Ukraine and other laws (except labor law) don’t mention discrimination based on sexual orientation. Formally there have been no hate crimes against LGBT+ people in democratic Ukraine. The state system ignores a particular part of the population and continues to maintain a status of invisibility for it, despite decades of work by human rights organizations. In the legislation, the relationship between state power and LGBT+ people is formulated as the category «other characteristics». It excludes same-sex attraction from the current model of «well-being» society. My personal experience of being gay in post-Soviet Ukraine focuses on the emotional component of everyday life and exposes the discriminatory policies in action through the controversial issue of how can I feel comfortable in a homophobic environment.

During the residency, I would like to refer to the “emotional tangle”, i.e. any accumulated ideas, concealed concepts or obsessive thoughts resulting from working alone. I am interested in the feeling of stacking, penetrating, mixing positive thoughts, interesting ideas, passionate images with promptings full of self-criticism, sparks of irritation or moments of stiffness and emptiness. The inner conflict and uncertainty will be illustrated in the installation Cloud, an elaborate piece of work that will reflect my changing feelings, that will be placed directly above my desk where I work on a daily basis. Initially a small cloud-like form, light and bright in structure, Cloud will be expanded over time. From airy design, to something dirty, neglected, to something pleasant again. I call the second work which I intend to create Canopy. It will consist of a stack of white sheets that will be used for notes, mantras, embroideries, drawings, diagrams and sketches – all inspired by the time I spend inside it. It will provide a safe haven and a way for me to detach from the “landscape” of the apartment, the tasks that await me, the dirt, the view from the window, and the lights outside. An additional element of the planned work will be the process of temporary transformation of the apartment into a studio, taking control of the indicated territory, photographic documentation and minor accompanying activities, such as note taking, report writing, as well as the production of smaller installations and objects.

Dorota Ścisła – born 1993 in Toruń. She is a visual artist and graphic designer living and working in Poznań. She specializes in gravure printing techniques and artistic fabric. A degree from the Leon Wyczółkowski Art School in Bydgoszcz (2013) and the faculty of Utilitarian Graphics at the University of Arts in Poznań in (2019). Volunteer and then assistant at the Rodriguez Gallery Foundation in Poznań. She creates prints, illustrations, objects and installations; her work has been presented at numerous exhibitions in Poland, Germany, the Netherlands, Italy and Slovakia. Her creative activity focuses on non-standard forms of display and unusual technical solutions. The artist combines interest in calligraphy and embroidery in order to create what she calls “scribbloidery”, i.e. combinations of words and embroidery. Her fascinations include decay and deformation which might lead to redefinition or transformation. Her feminist themes refer to the perception of women through the prism of externality. These have led the artist to the current fascination with the relationship between the body and the emotional side, as well as eroticism that arises from emotional processes and needs. She is open to artistic dialogue in the form of partnership and cooperation with other artists.

Darkness is a place for the lost and the unhappy, in darkness there is insomnia, non-being, loneliness, alienation, inability. Hidden in the dark is a colourful history of LGBT culture, drag and queer scene. This is the milieu of Vogue Balls that have made themselves at home in underground clubs. There is violence and crime in the dark. There are nightmares in the dark, horrors are played out. In the dark, we allow ourselves to fulfil our sexual fantasies. Through the dark we see the true magic of what in daylight appears as mere razzle-dazzle and thus prevents us from experiencing real aesthetic emotions. My series of photographs is an attempt to find darkness in various aesthetic, social, political, historical and personal contexts. I explore situations that can only occur in the dark.

Dominik Więcek – born in 1992; degree from the Faculty of Dance Theatre at the National University of Drama (PWST) in Kraków; scholarship from the Folkwang Universitat der Kunste in Essen. Performances with his participation include: “Ubu the King, or the Poles” directed by Jerzy Stuhr, “Working title: Ego”, choreographed by Jeans van Daele, “I love Magdalena Deeply, Passionately and Unconditionally”, choreographed by Jacek Łumiński, “Inaria” by Giorgio Maddamm; cooperation with the Kraków Dance Theatre include the shows: “Nesting” choreographed by Idan Cohen, “You / Yours”, “Glamour” and “Estra & Andro” choreographed by Eric Makohon; cooperation with the German ensemble Bodytalk (with Yoshiko Wakki and Rolf Baumgart) in “Solidaritot”, “Shahin Najafi & Guests ”,“ Still Leben”. In 2016-2019 a dancer of the Polish Dance Theatre in Poznań, where he performed in the entire repertoire. He creates original performances and choreographies, including “Dominique” – a solo show which has won many awards in Poland and other European countries. He has co-created the show “Musica Posthumana” and choreographed of the show “Ah, How Dignified Were Their Lives!” directed by Marcin Liber. Together with Dominika Wiak, Daniela Komędera-Miśkiewicz and Monika Witowska, he has co-created the performance “Sticky Fingers Club”. Currently, he has teamed up with Michał Przybyła to create the Direct Message Collective. Their performances include award-winning “Bromance”, and “Animalia”. He is a scholarship holder of the Ministry of Culture and National Heritage. He is a fashion photographer and works as a stylist.