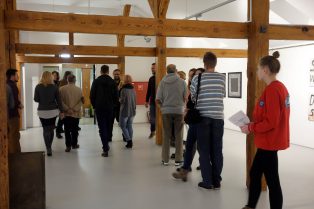 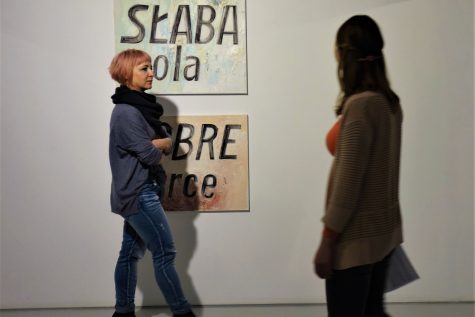 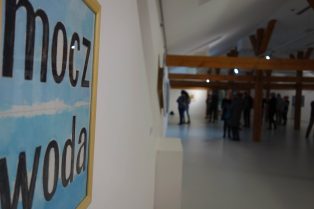 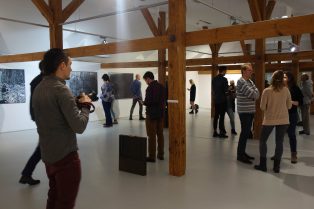 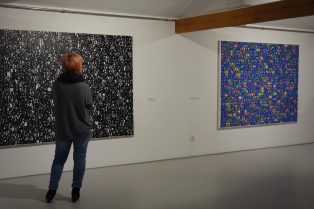 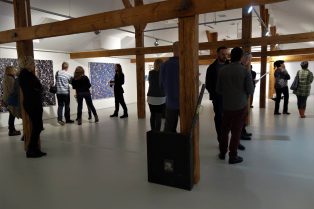 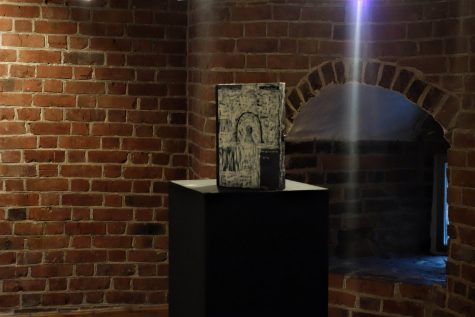 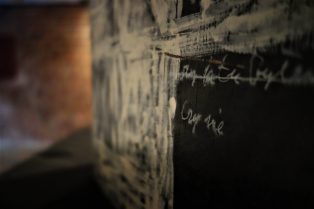 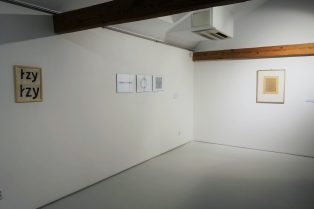 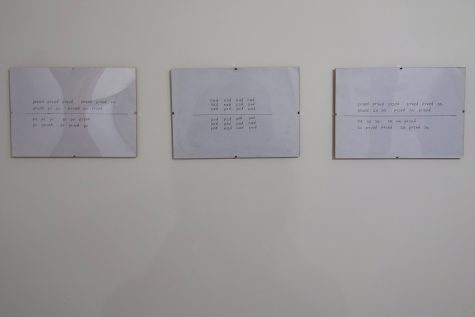 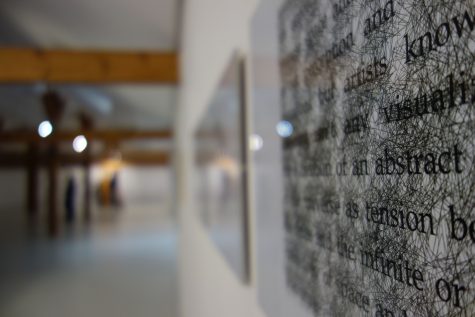 Explosion of a Letter.
Iconography of Textuality and its Discontents

When over half a century ago Mirceal Eliade wrote that “[a] sign is asked, to put an end to the tension and anxiety caused by relativity and disorientation”, he must have perceived the act of production and constitution of signs as an expression of a fundamental need for fixing “an absolute point of support”. According to the author of The Sacred and the Profane, a validation and a justification of human existence – not only in its immanent, but, primarily, in its transcendental dimension – demands a symbolisation as well as a ritualization of reality.

Relations of belonging occurring between a human and language are a logical consequence of the fact that since the moment of our birth, when we begin to construct our subjectivity and identity, we ‘inhabit’ a language, which is our (all in all, double-edged) refuge, instrument and discursive practice. Linguistic mediation serves mainly our purpose of creating an individual field of immanence – the great movement of thought – peopled by imaginary figures and conceptual personae, a reconstruction of the physical world and of our place within it. They are essentially an expression of trust in symbolic systems as well as acts of obsessive belief in representation, which assumes, Julia Kristeva argues, “a certain appropriates (imperfect, to be sure) to be considered possible between a sign and not the referent but the nonverbal experience of the referent in the interaction with the other.”

Unfortunately, the reality of our experience of the world revises the utopia all too quickly, leading us to recognise and conclude that “the chasm that settles in between subject and signifiable objects is translated into the impossibility for concatenations to signify.”

Language, as we have known since de Saussure, is an arbitrary, autonomous and historical structure. It follows the dynamics of cultural transformations, which had contributed to the loss of its presumed transparency in the Late Enlightenment. As a result linguistic discourse assumed inadequacy and non-transparency. The process have been repeatedly exposed and deconstructed on various levels. It is sufficient to recall here the classic critiques of Marx, Nietzsche, Freud and Lacan.

Two essential voices among contemporary authors are worth mentioning here – Barthes’ and Derrida’s – locating the loss of transparency by language in specific socio-cultural realities. Roland Barthes situates the point in the times of transformation of the feudal order into a bourgeois society and the generation of market capitalism; at this point a semiotic conversion takes place – landed property (including gold) is superseded by money and other derivates. Thus the historical transition from index, having a real origin, to sign, which has none, happened. A repercussion of the transition is “the limitless process of equivalences, representations that nothing will ever stop, orient, fix, sanction. […] the signs (monetary, sexual) are wild because, contrary to the indices (the meaningful regime of the old society), they are not based on an original, irreducible, incorruptible, immovable otherness of their component parts […] in the sign, which establishes an order of representation […] the two elements interchange, signified and signifies revolving in an endless process: what is bought can be sold, the signified can become signifier, and so on.”

A similar conclusion is arrived at also by Jean Baudrillard, who notes that “it was capital which was the first to feed throughout its history on the destruction of every referential […], which shattered every ideal distinction between true and false, good and evil, in order to establish a radical law of equivalence and exchange.” Inasmuch as Barthes and Baudrillard locate the critical point in the era of market economy formation, Derrida relates the semiotic caesura to the turn of the 19 th and early 20 th century, when “destructive discourses” were activated, on account of e.g. Nietzsche, Freud and Heidegger, followed later by Lévi-Strauss, enabling a subversion of every philosophy of presence (identity), understood since then as “the history of metaphors and metonymies”, and leading to the proposal of a new – post-structuralist – concept of a sign. All these events happened at the moment, Derrida writes, “when language invaded the universal problematic, […] when, in the absence of a centre of origin, everything became discourse – […] that is to say, a system in which the central signified, the original or transcendental signified, is never absolutely present outside a system of differences. The absence of the transcendental signified extends the domain and the play of signification infinitely.” The process is in a sense played out ad infinitum, while the dislocated centre (hence, its actual absence) is the absence of the subject and of identity, which have since the moment, through the processes of equivalence and free exchange, become mere simulacra.

But even they, with their awareness of the permanent play of referents and their recognition of the autotelism of language, can immerse themselves in their own palimpsestness, in the words of Michel Foucault, in the “enigmatic density” of language, because “now it is not a matter of discovering some primary word that has been buried in it, but of disturbing the words we speak, of denouncing the grammatical habits of our thinking, of dissipating the myths that animate our words, of rendering once more noisy and audible the element of silence that all discourse carries with is as it is spoken”, since, writes the Lithuanian poet, Arvydas Šliogeris: “silence is the true home of Being”…

Therefore each identical representation covers the silence of unmediated reality with a hubbub of texts reflecting other texts, it is a trace of the work of thoughts and the engine of meaning. Channelled through transcendental illusion, representation, Deleuze writes, “comes in several forms, four interrelated forms which correspond particularly to thought, sensibility, the Idea and being. In effect, thought is covered over by an “image” made up of postulates which distort both its operation and its genesis.”9 This ultimately makes representation incredible. No strict symmetry or projection holds here, because, Derrida argues in Of Grammatology, “representation is always already other than what it dedoubles and re-presents.”10 Thus we can agree with Derrida’s argument that representation is strictly non- representable, which leads to the conclusion that (strictly speaking) “there is no representation or representation”. Consequently identity is only an attempt to reproduce already existing patterns, it is created, rather than discovered, it is a representation of representation understood exclusively as a continually renewed utopia. The concept, to which the metaphor of Velázquez’s mirrors is frequently applied, mentioned as well by Derrida in his Psyche (in reference to Leibniz’s writings), suggests that there is a self-referentiality to representation, which is also underlined by Deleuze, who writes: “It is the essence of representation not only to represent something but to represent its own representativity.”

The recognition of the aspect of representation is unquestionably an enormous challenge in a world where identity is consumed with itself and a differentiation of its meanings, defending its imaginary bestiary like the last stronghold of sense… The project of the conference and the exhibition Explosion of a Letter. Iconography of Textuality and its Discontents invokes the problematic of creation, production and distribution of what is referred to as civilizational ‘senses’. The concepts, quite obviously, have a very long history and stem from the eldest traditions, comprising the conceptual heritage of Western antiquity as well as of the Middle and Far East, but an activation of the mythical space and its corresponding mythography is as distinctive for present times. In the context an exemplification of relation occurring between a ‘word’ and an ‘image’ seems especially interesting; the relation directly articulated by the artistic ‘blot’. For a blot, as Tadeusz Sławek once defined, “is an explosion of a letter, a sudden affirmation of freedom […]. A blot is not only a text’s disease, but also its celebration, its freedom. […] A blot is a quintessence, a possibility of evoking any letter, any meaning” …